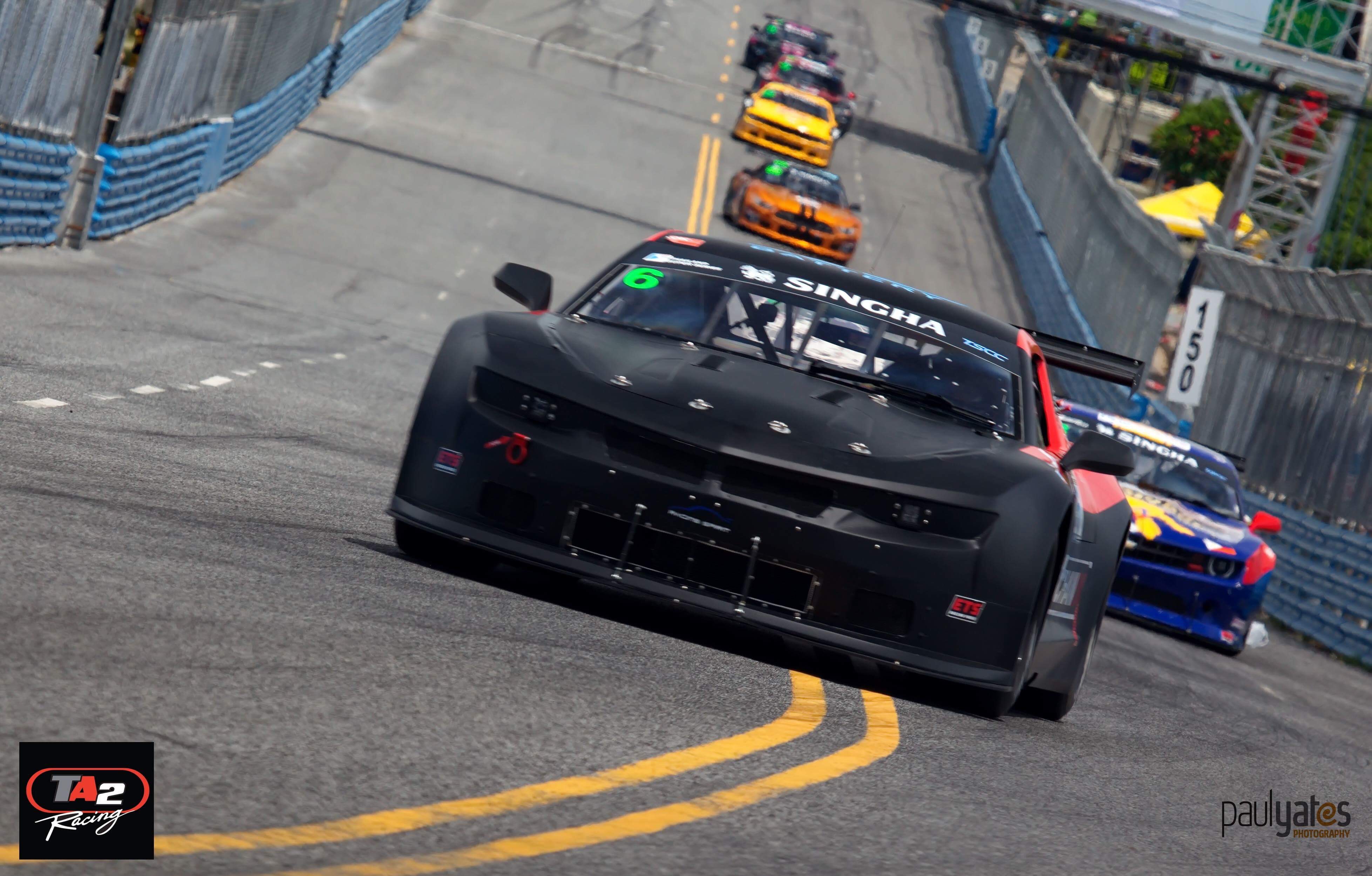 The 12th Bangsaen Grand Prix, an international motor sport racing event was the venue to host over 200 hundred car drivers from 24 countries, taking place during the 11th-15th of July, at this typical challenging street circuit with tight corners and an uneven surface would make this a very challenging time for all drivers.

Friday saw our TA2 drivers and cars form up on the grid giving the very large crowd a unique opportunity to get up close and personal with the teams as they prepared the cars for the race. Lining up in a grid formation at the side of the beach made this a great spectacle.

Lining up on the grid position, Phillip Massoud in the mustang qualified first, second was Don Pastor in the Camaro and Micheal Freeman also in a mustang was third.

The race got underway and for the first few laps everyone held there starting positions from the grid. It wasn’t long before Micheal Freeman was overtaken by the B-Quick car number 26, driven by Narim Naeosathon in the Camero and following very closely was car No. 88, Craig Corliss. Phillip stretched out a healthy 10 second lead within a few laps leaving the rest of the field strung out behind him. Even though Don Pastor eventually caught up with Phillip, he then made a mistake which dropped him down to fifth position.

The street circuit lived up to its reputation with a number of incidents, forcing the safety car to be deployed on a couple of occasions. The race was subsequently won by Phillip, Grant Supaphong started fourth and finished a credible second and Micheal Freeman third.

TA2 welcomed Lenso as a new major sponsor, driving for them this week was newcomer Cem Yudulmuz in car 35 the mustang

Saturday was a rest day for the TA2 teams which allowed vital maintenance to be done on the cars In readiness for the race on Sunday.

The position of the garage on the beachfront gave the crowds a good opportunity for them to see at first hand all the teams hard at work on the cars.

Race day once again came around quickly on Sunday for the TA2 team, all the cars were prepared and ready to go, the very hot conditions were about to make it not only difficult for the drivers and cars but also for the very large crowd that was going to be watching. The temperature Trackside rose to a staggering 51 degrees.

Each drivers second fastest lap in qualifying was to be there start position on Sunday. Grid positions were Phillip Massoud, Don Pastor and Craig Corliss. Once again there were very large crowds on the starting line with a couple of spectator stands and a large tv screen making a great spectacle of the first hairpin bend.

As normal a rolling start got the race underway behind the safety car. It wasn’t long before the first major incident occurred with the cars in the class behind the TA2 ‘s, the race was red flagged and all cars returned to the pits to enable the rescue vehicles to take 3 vehicles that had crashed off the track. Twenty minutes later the car got back underway behind the safety car and after 1 lap were allowed to Carry on with race. After a couple of laps Don Pastor undercut Phillip under braking at the hairpin bend and took the lead. Don Pastor made a subsequent mistake giving Phillip back the lead. Number 22 the BQuick car driven by Grant Supaphong Made a number of passing manoeuvres overtaking Craig, car number 88 into second place.

The race was neck and neck with. Phillip and Grant coming into the hairpin bend but they touched putting Grant out of control and into the barrier, Greg Bennett in car 11 also locked up and blew a tyre at the same hairpin both Grant and Greg limped back to the pits, the race then continued with Craig in car 88 putting more pressure on Phillip for the number 1 spot.

The pressure finally told and at the start finish hairpin after Phillip locked up Craig was able to take the lead, also Greg Bennett in the fragrance car was able to rejoin the race. After a further incident the race was stopped and Craig Corliss in car 88 was the winner. Phillip Massoud finished in second and the newcomer car number 35 Cem Yudulmuz in the mustang finished in third. It was a great race and spectacle for the crowd.